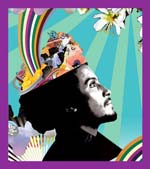 Born to a Filipino mother and English father, Andy won a scholarship to Liverpool’s prestigious LIPA McCartney, then he caught the eye of A & R talent spotters whilst playing in a band with Steffan Halperin (now the drummer in Klaxons) and performing on Corinne Bailey Rae’s multi-platinum debut album.

Mamas Gun’s debut album ‘Routes to Riches,’ is scheduled to be released in September 2008 by new label Lockout Music. The first single ‘Pots Of Gold’ has reached #1 position on Hard Rock Top 41 chart for August 3rd-August 16th 08 edition. Check out www.mamasgun.co.uk for more about the extraordinary talented new artist.

Here’s our exclusive interview with Andy Platts about the debut album and his music.

Q: The name Mamas Gun is taken from the title of Erykah Badu’s album. How does she become such an inspiration for you?
A: I’ve always loved ‘Baduizm Live’ – it’s probably my most favourite album that she has recorded, the playing and singing is fantastic but the reason for choosing Mamas Gun as a name was just because I thought it would make a really cool band name! So when the day came that I had to find a new name for my band I thought – perfect, ‘Mamas Gun’.

Q: Tell us who’s the man behind Mamas Gun.
A: I guess that would be me! Well what do you want to know?? I write and sing all the songs for Mamas Gun….I’m half English, half Filipino, I was born and lived in Hong Kong for 10 years of my life so I’m no stranger to South East Asia…oh and I’ve got really big hair.

Q: Who’s your musical influences?
A: Not an easy question but here are a few names that have inspired me through the years:  Queen, The Beatles, ELO, Shuggie Otis, Marvin Gaye, Stevie Wonder, Joni Mitchell, Prince, Jellyfish, Jimmy Scott, Jeff Buckley, James Brown, Lewis Taylor, Scott Walker, Radiohead, Sly & The Family Stone, Dusty Springfield…how much time do you have????

Q: You release your debut album Routes To Riches this year. What’s the album like? Is there any plan to release it in Asia, especially Indonesia?
A: The album is a real mixture of different styles and grooves but it’s all underpinned by soulful melodies and a heartfelt tip of the hat to the 70’s…it’s an album to dance or just listen to..

Q: Pots Of Gold is a laid-back late 70-ish kinda style. What’s the story behind the song?
A: The song is about chasing your dreams and aspirations at the expense of something more precious.

Q: Do you have your own favorite tracks from Routes To Riches?
A: Well the album is not finished yet but I do love singing ‘Ain’t Your Life a Bitch’ and of course, ‘Pots of Gold’…another song which is yet to be finished is a song called ‘Let’s Find a Way’…

Q: A lot of people here compares your first single ‘Pots Of Gold’ to Lenny Kravitz’s It Ain’t Over Til It’s Over. Are you a fan of Kravitz?
A: Wow really people compare it to that song? Well I guess I’m flattered cos Lenny’s song is a classic! I like his early stuff – the first album, but I wouldn’t say he’s been an influence on me…we probably share a lot of the same influences though..

Q: Are your other songs similar to Pots Of Gold?
A: One of the things I try to do as a songwriter is to push myself, evolve and develop. This usually means I try to not write the same song twice – I’m always thinking of a new angle, whether it’s lyrics, music or production.

Q: What are the most recent played songs in your ipod/mp3 player?
A: Last 5 songs I played on my Ipod:

Q: Some new artists nowadays start their music career at an early age. How old were you when you decided to jump in the music industry? How was the process of making your debut album?
A: I guess I was in my mid-teens when I decided seriously that I would do music as a career. After I left school I did a music degree at Paul Mc Cartney’s Music Institute (LIPA) based in Liverpool, England.

I’ve been writing songs since I was 8 years old and playing piano and guitar from a pretty early age too so music has always been a constant companion my life.

Making the album was fantastic but it’s still being finished as we speak. We recorded the band over a period of a month in East London at a great little studio called Din Sound. It took just over 4 months to get most of the album completed, there are just a few more things and changes that I’d like to hear on the record before I’m absolutely happy with it.